Dr. Michael Rieber is the head surgeon at Orthopaedics Unlimited and specializes in minimally invasive hip, knee, and shoulder joint replacement surgeries in the Newark, NJ and Livingston, NJ area. He is also one of the most skilled orthopedic surgeons today who performs minimally invasive joint replacement surgery in the Tri-State area, and has extensive experience with sports medicine and injuries through his time as team physician and orthopedic surgeon for many Newark and Livingston-area teams.

The hip is a ball-and-socket joint that is made up of the femur (thighbone) and the acetabulum, a concave surface located on the pelvis. The femoral head acts as the ball and fits snuggly within the acetabulum. During a hip replacement procedure, the surgeon will remove the end of the femur and replace it with a new femoral head. The surgeon then cleans the acetabulum in order to clear away any diseased bone and cartilage and make room to implant a new acetabular cup, which allows the new femoral head to move and rotate like a natural hip joint.

Hip replacement surgery is one of the safest and most common surgeries performed in the United States. The development of minimally invasive measures have made the surgery safer, withvastly improved recovery times and reduced pain associated with the procedure. Dr. Rieber is an advocate of minimally invasive surgical techniques, which allowing him to replace the joint through two small incisions versus a larger and much more invasive incision. MIS lets the hip recover more quickly and significantly reduces the post-op recovery period.t.

When the hip joint is injured through trauma or through natural degeneration such as osteoarthritis, hip replacement surgery often becomes necessary. Other conditions that can damage the hip joint and cause pain include, but are not limited to: osteonecrosis, rheumatoid arthritis, and infection. 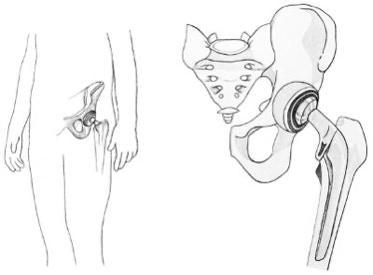 An artificial hip replaces damaged bone and cartilage during an operation in the hospital.

In a traditional surgery, the surgeon makes a 10- to 12-inch incision through some of the muscles around the hip to expose the joint. Then the surgeon removes the damaged bone and cartilage and replaces them with an artificial joint, or prosthesis.

In minimally invasive surgery, the surgeon makes one or two much smaller incisions between the muscles. These incisions may be in the back, side, or front of the hip. The recovery time for the mini-incision surgery is shorter than for traditional surgery.